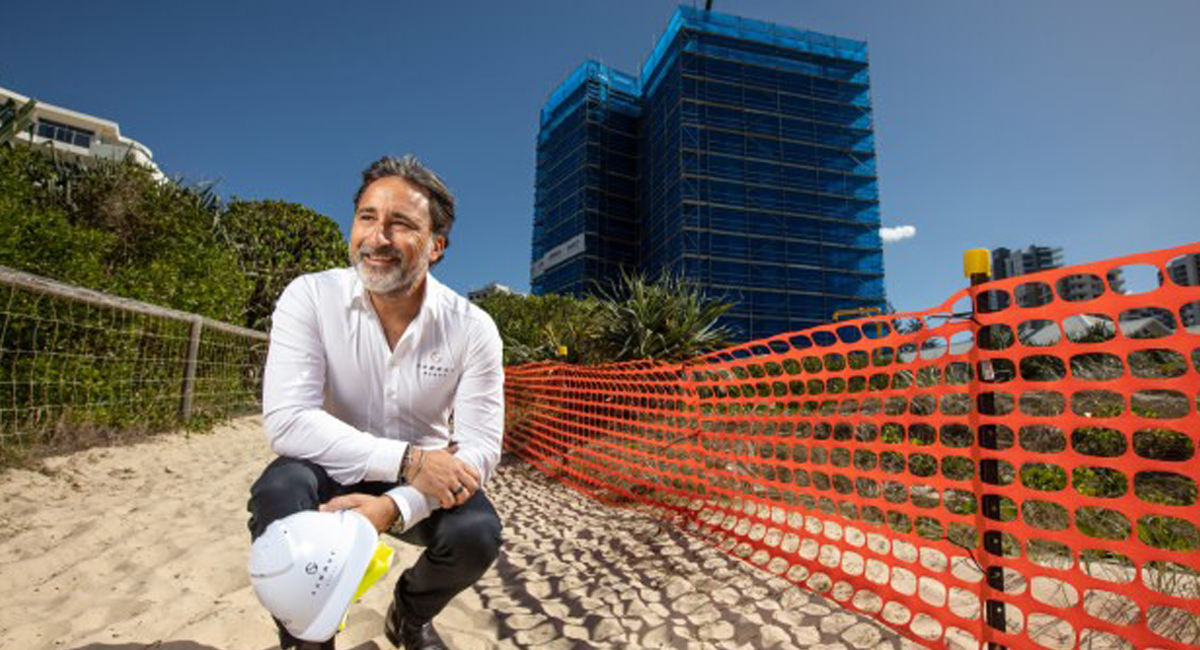 Sydney developer Allen Sammut is pressing ahead with the construction of a luxury residential tower at Surfers Paradise on the Gold Coast despite surging building costs eating into its profitability.

“We will make a profit, so it is still worthwhile, but it has diminished,” Mr Sammut, managing director of family-owned Sammut Group, told The Australian Financial Review.

Allen Sammut at the Surfers Paradise site where construction on a $200m tower will soon begin.

“For me, it’s all about completion. We’ve sold to our database. It’s our brand, and so we are continuing on,”

Cronulla-based Sammut Group’s $200 million tower, its first on the Gold Coast, is being built on an absolute beachfront site at 43 Garfield Terrace by construction giant Multiplex.

“We’re almost completely sold out. Half the buyers have purchased apartments as their new primary home and half as a holiday home,” Mr Sammut said.

The Sammut tower features 43 apartments and is mostly sold out.

Sammut Group’s decision to proceed to construction – site works will begin in a few weeks and the project is due to be completed in the first quarter of 2025 – follows Melbourne apartment developer Central Equity blaming an “unprecedented escalation of construction costs” for its decision to cancel a $500 million tower called Pacific One in Surfers Paradise.

In another sign of the impact of rising costs and building delays, ASX-listed developer Cedar Woods hit the pause button this week on future stages of its $180 million Greville master planned community project in inner Brisbane. Both developers will refund deposits to buyers.

Mr Sammut said his family’s development had been “impacted like everyone else” and estimated that construction costs had increased by more than 30 per cent since the project kicked off.

However, he was adamant this was not the start of another boom and bust cycle on the Gold Coast, such as in 2012, when the 77-storey Soul tower ended up in the hands in receivers after apartment values crashed on a wave of oversupply.

“This time it’s completely different. We are still getting enquiries and sales and there has been no drop in prices,” Mr Sammut said.

“The fundamentals are that there is a shortage of apartments and homes, and we are going to run out of supply.

“If there are projects that are not going to start, that undersupply could accelerate even more.”

Andrew Bell, chairman of Ray White Surfers Paradise Group, which had been marketing Central Equity’s now scrapped project, told the Financial Review he expected a 12-18 month hiatus as developers “run a tape measure over everything”.

“There will be scores of projects where banks have told developers they won’t fund them,” Mr Bell said.

He said these developers were “doing the sensible” thing by pausing these projects.

“Next year there is an expectation that construction costs will come down, and then most developers will press the reset button,” Mr Bell said.

With demand expected to remain strong, Mr Bell said the hiatus could lead to a shortage of supply, and push up prices.

Mr Sammut said he was confident the construction crisis would abate.

“We’re seeing it settle down already. Contractors are coming back to win jobs, as opposed to not responding,” he said.

He added that the Gold Coast apartment market remained highly appealing to buyers, given its transformation from a predominantly holiday rental market to a destination people wanted to “pack up and move to”.

“The dining and bar scene, the shopping centres, the tram – everything has improved. The Gold Coast has matured into a very liveable city,” Mr Sammut said.