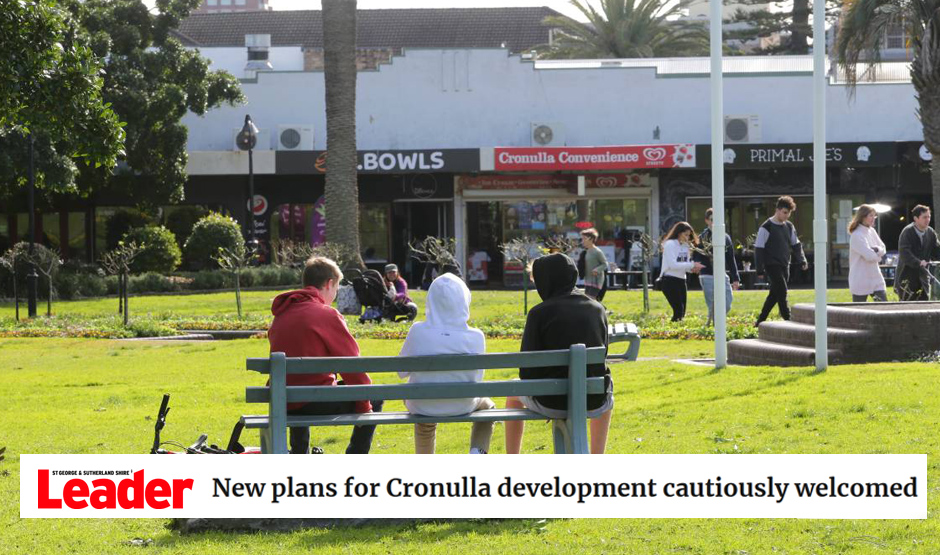 The councillor who led opposition to the proposed 14-storey hotel project at Cronulla says the developer has listened to the concerns of the council and the community.

Cr Michael Forshaw, who along with other Labor councillors blocked the original plans, will wait for council staff to assess the new proposal before taking a position.

Sammut Developments has submitted a Planning Proposal for a commercial development half the height of what was sought originally.

The maximum building height has been reduced from 50 metres to 25 metres (seven storeys), complying with the Local Environmental Plan (LEP).

However, the new proposal would still involve a higher floor space ratio (FSR) than that prescribed in the LEP.

The boutique hotel accommodation component in original plans has been removed , while retaining potential restaurants, function centre and bars.

The plans include a two storey podium containing food and beverage premises with commercial office uses, including shared co-working space, above.

Cr Forshaw said he was pleased the developer “has decided to submit a new proposal that more closely aligns with council’s LEP”.

“Mr Sammut and his team have listened to the concerns of council and the community,” Cr Forshaw said. “What we need on this site is a quality development that will benefit the community and local business whilst respecting the special character of the area and Monro Park in particular.

“The proposal will now be assessed by council staff and the Sutherland Shire Local Planning Panel (SSLPP). “I look forward to receiving their detailed report and recommendation.”

Cr Carol Provan, who led support for the initial plans, said the site “is long overdue for an upgrade as it is the gateway for Cronulla for everyone arriving by rail at Cronulla Station and their first point of contact”.

“It has a significant and unique position that offers the opportunity to activate and revitalise this southern end of the mall and indeed encourage more activation with the rest of the Cronulla,” she said.

“The previous Planning Proposal with a hotel was rejected by the council through due process as it became clear that the main concern was the increased height sought in the submission to cater for a hotel was going to overshadow Monro Park more than was deemed acceptable and permissible under the current LEP.”

Cr Provan said the building height in the new proposal would not add any more overshadowing of Monro Park than any other complying development.

“The proposal is seeking an increase in the permissible FSR to accommodate a commercial building over a residential building, which would provide a great stimulus for the Cronulla Centre by attracting many new businesses and their staff to a new commercial offering,” she said.

“The FSR sought over and above what’s permissible will have no adverse impact to Monro Park, but needs to be assessed by council.”

Cr Provan said there was no intention or request to remove the adjoining fig tree, and it would be protected if a DA was approved.

“What is in front of council at the moment is only a Planning Proposal seeking an increase in FSR and not a DA, and it is essentially in line with the LEPs expectations,” she said.

“The planning proposal will be assessed by council staff and it is likely a preliminary report will be considered by the Sutherland Shire Local Planning Panel followed by a full council meeting.

“If accepted by council, statutory public consultation will occur following Gateway determination by the Department of Planning,Industry and Environment.

“If all these are positive, a formal DA can be lodged with council and will be assessed by council accordingly.”